and Journal of Occultation and Eclipse (JOE 35)

Abstract: For the first time electrical behavior of Jupiter’s Io moon was brought up by Thomas Gold and after him, Perrat and Dessler simulated volcanoes of Io to the “Plasma Gun” that was coordinate with achieved data from the voyager spacecrafts and also effects of Io’s volcanoes and plasma tours was consider. By receiving more data, Wall Thornhill observed specific volcanoes of Io in more details and explained perfectly Io’s Plumes and Lavas. In this article we introduce electrical behavior of Io’s volcanoes and also analysis latest received data from the perspective of an electric model for these volcanoes in Io. It seems predictions and models that planetary sciences geophysicist are offering about this moon are not working properly.

Introduction: According to data in the form of photos and videos transmitted from Io moon to the Earth, there are many acting volcanoes in Io that are active for rather long time. Videos and photographs from surface of Jupiter indicate that there is a strong electromagnetic fountain in Io. Analysis on data has given by Voyager probes shows that Io’s volcanoes could be the main factor of appearing these strong electromagnetic and electrostatic fields.[6,7] In fact, the mechanism can be understood like the plasma gun that Output materials from these volcanoes, erupt in the form of plasma and electrical discharge from the output materials is visible, they cause plasma tours around the Jupiter and even sometimes cause some effects on Jupiter’s gasses.

Prometheus and Tvashtar volcanoes are the most known active volcanoes in Io. This viewpoint is different from the perspective of geophysicist’s planetary sciences, because they exampled Io’s volcanoes like volcanoes in the earth in the beginnings of their formations, but they have no convincing explanation of the behavior of lava flows or volcanic eruption and their description about destiny of lava currents in Io are not responding properly, but considering electrical model for the Io moon, named events will be more desirable to explain.[15] As Dessler’s attitude that exampled them like electric arcs on Io, an arc cathode discharge is responsible for volcanic eruptions.[6] According to latest achieved data of Io, scientists assumed that places of some volcanoes on Io are not correctly right, because the places of these volcanoes are really effective on the Jupiter and formation of plasma tours. So based on this finding, the notion of Io’s volcanoes’ similarities to the earth’s volcanoes is challenging but in spite of these data there is no interference in electrical model of Io.

Electric Arcs on the Io: Observations of Io moon indicate that Io has many geophysical motions and also many volcanoes and turbulences in it. Some geologists consider Io like Earth shortly after the moments of its formation, but our analysis of Io volcanoes shows that there is no similarity to volcanoes in earth, because strong Geo-Electric activities are responsible for these volcanic acting and cause eruption of ionic materials from Io’s surface in the form of plasma that also effect on Jupiter.

The Io moon was observed by the Voyager1 and 2 spacecrafts covered with volcanoes[1]. At that time nine active volcanoes were observed during the Voyager1 encounter, eight of which were still active during the Voyager2 flyby 4 months later. Detailed of the plumes from one of the these volcanoes were rather striking in that the plumes material was ejected in a wall-defined cone whose geometry showed converging matter at large lateral distances from the vent, and the plume material was concentrated into striations. Thus, we have a volcanic vent with exist velocities of about 0.5 km/sec, but with the volcanic effluent concentrated into a cone with a half angle initially less than about 25 to the vent axis. Furthermore, the material in the cone tends to concentrate into filaments that terminate on a narrow, well-defined, concentric annulus[2]. The possibility that details of the volcanic discharge are a manifestation of a plasma arc at a volcanic vent were initially that first time suggested by Gold.[4,6,7]

The dominate electric field in the Jupiter magnetosphere is corotional motion of Plasma. This is given by:

Where R is the position vector from the center of Jupiter and ω is the angular velocity vector of Jupiter’s rotation.[6,7]

Plasma in Jupiter’s magnetosphere injected from Io plasma tours that flows past Io with a speed of about 57 km/sec. The magnetic field from Jupiter at Io is 1900nT. The v×B voltage included across Io that it’s value is 3630km is therefore 400kV, and A was observed to be flowing out of the Io.[1]  It would seem plausible that the current would tend to concentrate in the volcanic plumes, which would give the current easy access to the highly conducting molten interior of Io. It seems that the crust consisting of sulfur and frozen sulfur dioxide, would be relatively poor conductor, thus directing the current to the volcanic vents. If we assume the available power ~0.4 TW is equally divided between the 4 largest volcanic plumes, we have W of continuous power available for each volcanic arc. The interaction of magnetospheric particles with the Io and surface causes sputtering and the sputtered ions are picked up by the magnetic field lines and get trapped. Hence, Io’s orbital path is populated with sulfur dioxide which is known as the Io plasma torus. The Io plasma torus is a manifestation of the relation between Io and Jupiter’s magnetosphere. Na, K and Cl are also found in the torus.[6]

Galileo observations have improved our knowledge about the Io-Jupiter relation considerably. The particles and field instruments detected strongly perturbed fields, beams of energetic electrons and ions, and a dense, cold decelerated plasma flow in Io’s wake From the asymmetries observed by the Galileo plasma wave instrument during the various flybys suggested that the Io’s ionospheric plasma density is being strongly influenced by the magnetospheric plasma flow around Io similar to the radio occultaion experiment observations. Detection of emissions at the Io footprint in Jupiter’s auroral atmosphere in the infrared, ultraviolet, and visible walengths revealed that the particles associated with Io reach Jupiter. The interactions of magnetospheric plasma with Io’s and Jupiter’s atmospheres produce emissions, which are discussed in the next sections.[2] 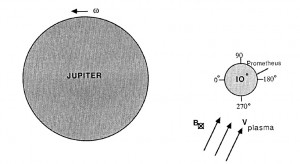 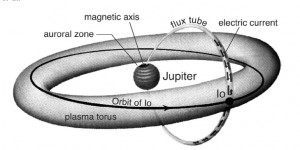 As you see for the given upstream plasma conditions at Io there is more energy in the magnetic field than in the bulk velocity or the thermal velocity. So the largest planet in the Solar System, with the most active magnetosphere in the Solar System, has its electrical circuits “shorted out” by its inner satellite. The million-Ampere currents flowing through Io’s crust make it a unique laboratory for studying the processes of interplanetary-scale electrical discharges.[8,9]

Io’s Plumes: Plume velocities are unexpectedly high and uniform. The plumes are tall, have an umbrella shape, and deposit material in a ring around the source. They also have a filamentary structure.

Io orbits inside a donut-shaped cloud of charged particles that come from the material in the plumes, and a tube of electrical current connects Io with Jupiter’s auroras.

Arcs accelerate material to fairly high and uniform velocities. This produces uniform trajectories that deposit material a uniform distance from the source, explaining the rings around the volcanoes. And the forces in the discharge channels pinch the arcs into filaments. Repulsive forces between filaments tend to space them equally, often in pairs, around the plumes.[14]

Analyses of the Io’s Volcanoes Observations: Already we spoke about the Voyagers missions, but we have others data about Io that obtained in difference missions, one of them is Galileo, the Galileo probe took a photograph from a position over the plume of the volcano Prometheus on Io. As it spewed material 100 km into space. As you see no such central vent can be seen in these pictures. Instead, we see bright streaks along the margins of the lava, but planetary geophysicist foretasted that “were acquired to search for and image the plume vent or vents. We expected to see a small crater surrounded by radial streaks!” 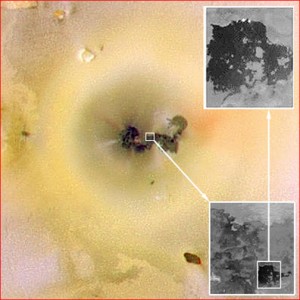 The temperatures in the active regions were higher than the spacecraft Galileo’s thermal sensors could measure, far hotter than any volcano on Earth. Yet ridges like Mongibello Mons require a rigid crust to keep them from collapsing.[15] From [12,13,14,15] we suggest that the volcanoes on Io are electrical arcs driven by charge differentials between Io and the plasma sheath[3] that envelopes Jupiter.

The discharging was discovered to be focused on the edges of the so-called “lava lakes”, though the rest of these dark fields are comparatively cold. None of the expected volcanic vents could be found. Rather, the plumes of the volcanoes are actually moving across the surface of Io, an exclamation point being provided by the plume of Prometheus which, in the years since Voyager, has moved more than 80 km. Much to the astonishment of mission scientists, it was discovered that the “volcanic” plumes emit ultraviolet light, something inconceivable under normal conditions of volcanic venting. Ultraviolet light is, of course, characteristic of an electric arc.  It is why arc welders wear darkened welding masks!

The Tvashtar volcano near the north pole of Io, was seen on 19 Jun 2006 by the New Horizons probe to be shooting a plume more than 290 km above the surface. A NASA press release from that time reported that “…the remarkable filamentary structure in the Tvashtar plume is similar to details glimpsed faintly in 1979 Voyager images of a similar plume produced by Io’s volcano Pele. However, no previous image by any spacecraft has shown these mysterious structures so clearly.”[10,11]

It appears that the electrical circuit on Io is concentrating Jupiter’s current flow into several “plasma guns,” or dense plasma foci. Io is not being heated from within by friction. The most probable cause, based on observational evidence and laboratory analysis, is that Io is receiving an electrical input from Jupiter that is heating it up through electromagnetic induction.

Conclusions: According to various given theories about the explanation of Io’s volcanic behaviour and its affection on the Jupiter and formation of plasma tour around the Jupiter there are many unclear points that was described by Thronhill based on Perrat and Dessler ‘s analyses and viewpoints that conclude from Io  . Our study on different theories and Thronhill data analyses and also received data by NASA from Io and its volcanoes indicate that Io’s electrical model and similarities between Io’s volcanoes and electric arcs can be right. As a result this volcanoes and its eruptive plasma are main factor for producing plasma tours around the Jupiter and cause affection on surface of Io as well.

Finally we conclude that: 1- the vents of the Io’s “volcanic” plumes will be much hotter than lava.

۲- The plumes are the jets of cathode arcs, and they do not explode from a volcanic vent but move around and erode the periphery of dark areas (called “lava lakes” by planetary geologists).

۳- The “lava lakes” themselves are merely the solid surface of Io etched electrically by cathode arcs and exposed from beneath the sulfur dioxide “snow” deposited by continuous discharge activity. Therefore, they will not reveal the expected heat of a recent lava flow. 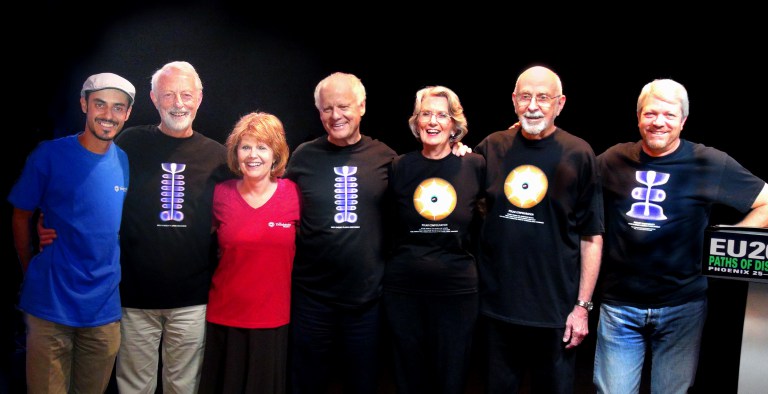